It has been sometimes since my last article. As a way to apologize and to wish a very good new year, I would to share with you an amazing eBook offer.

Packt Publishing is a British book publisher who has already published more than 2000 DRM-free ebooks and videos for IT professionals and for whom I had reviewed some Kinect ebooks.

They currently have a short time offer any ebook for 5$, this offer will last until Tuesday January 6th. So don’t miss it.
http://bit.ly/13TleWU 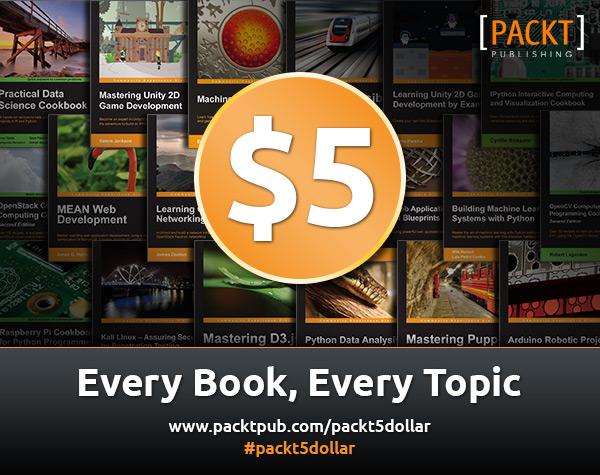 END_OF_DOCUMENT_TOKEN_TO_BE_REPLACED

The biggest announcement was that you will be able to develop Windows Store apps that are using Kinect for Windows! You can do this with your favorite set of tools, f.e. XAML & C#.

Unfortunately you will not be able to target RT devices, this is because the app still requires the Kinect drivers & runtime to be installed on the device. Next to that the RT tablets lack the CPU/GPU bandwidth that is required. Keep in mind that you will have to check this when you are starting your app to maintain a nice user experience.

At BUILD they also announced the universal apps that you can build for Windows 8.1, Windows Phone 8.1 and Xbox One. This is not possible at the moment for Kinect for Windows, only desktop and Windows Store apps!

On top of the currently supported tools you are now also able to develop Unity applications for the desktop or Windows Store apps by using a Unity-plugin!

By doing this the growing huge Unity community is joining the Kinect family since there are a lot of developers in the program creating awesome stuff like virtual worlds!

Kinect 101 – Introduction to Kinect for Windows

Chris White gave an introduction session on Kinect for Windows talking about the capabilities of the sensor & what the hardware offers. Next to that he gave the audience an idea about what applications are currently in use and how they are built. Last but not least he gave some demos & comparison with the two generations and points out the differences between them!

You can watch his session here.

He starts off with a quick introduction to Kinect with a high level overview of the architecture where after he explains how the Kinect methodology works. In the coding demos he creates a Windows Store app that illustrates the infrared stream and map the HandLeft-joint on it by using the BodyStream!

They also announced that Kinect for Windows Gen. II will be general available this summer!
Though they did not announce in what countries and what the price will be but hold on tight!

Last week they also revealed the sexy looks of the sensor, read my previous post!

The release is coming closer and I’m looking forward to see what you guys build with it!

Want to get started? Feel free to read some of my introduction posts –

Here is some additional information –